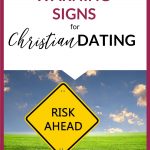 Just because you’re a Christian doesn’t mean that dating will be easy and without issues. Check out this sound Christian dating advice from a pastor’s wife with a heart to help Christian women grow in healthy relationships. If you’re ready to be dating, you need to be aware of these 18 warning signals.

He’s dreamy and he’s charming, but something about the dating relationship is making you feel increasingly uncomfortable. You can’t put your finger on it, but you’re feeling unsettled instead of doe-eyed and you know you’re missing something.

These are lessons I learned the hard way, and I want to help you avoid them.  If you see these warning signs in your dating relationship, consider ending the relationship promptly to avoid much heartbreak down the road. 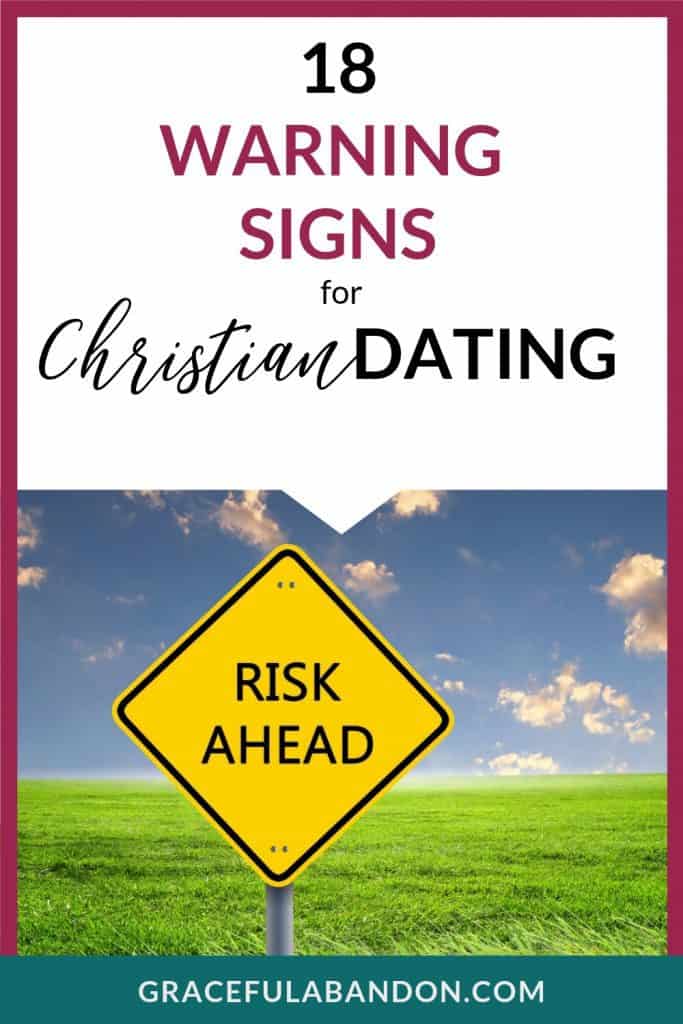 Red Flag #1: He Is Very Controlling

Telling you what to wear, how to spend your money, whom you should have as a friend are all examples of controlling behavior in dating. Checking up on you and needing to know where you are at all times are equally very controlling.

In dating, these are not normal behaviours. Sadly, these can be indicators of a potentially abusive partner. This is a big one.

Red Flag #2: He Doesn’t Hear Or Respect Your Feelings

I know you are thinking, “that is normal for a guy”.  But if you want a healthy relationship this is a deal breaker.

If you tell him something he has done has hurt you and he brushes it off and then proceeds to do it again, you are in for some major heartbreak if you proceed.

Red Flag #3: He’s Not Independently Caring For Himself

Ok, for some millennials out there this may be difficult.  There is a generation that will be living with their parents well into adulthood.  I may be old-school, but I believe a man should be working and supporting himself before he is fit to marry.

You need a fully grown man whom you can depend on. Fully grown men take care of themselves financially.

Red Flag #4: He’s Got A Large Chip On His Shoulder

You know the type, they see themselves as victims, and everyone owes them something.  For anything that goes wrong in their life, they have a long list of people they blame.  This can be a characteristic of a narcissistic abuser.

If you see this early, walk away fast.

Red Flag #5: He Has A History Of Angry Outbursts & No Resolution

I once dated someone from my church (a gun owner also….) who had an ex-wife with a restraining order out against him for threatening to shoot her.  Obviously, that information only came out after I started to date him.  He had frequent angry outbursts despite having had counselling.  Even though I broke it off after two weeks, he stalked me for months.

This is a definite sign of an abuser and I say get away…right away.

Red Flag #6: He Has Close Friends Who Are Immoral

We are the average of our 5 closest friends.  Thus, if you meet his friends and they are all players, gamblers, or they have no relationship with the Lord, you’d best walk away.

Red Flag #7: He Is Struggling With Addiction

Addiction becomes the primary relationship in an addict’s life.  He is not ready for a relationship until these issues are dealt with.

Red Flag #8: He Is Involved In Criminal Behavior

Or, even if it’s not current, he once was…but hasn’t rehabilitated with any formal program or accountability.

Red Flag #9: He Is Sexually Impure

Sex outside of marriage dishonours God and even our own bodies.

If your partner plays fast and loose around this, walk away and don’t look back.  Someone who cannot control their sexual urges before marriage is unlikely to keep to sex within marriage after they marry.

This in and of itself isn’t enough to call things off, but if he simply accepts it and hasn’t done any work to move past it, then it’s a danger sign.

We learn about how relationships look from our parents, and because we learn when our brain is young and soaking everything up. Unless he’s aware, it’s something you need to be aware of. 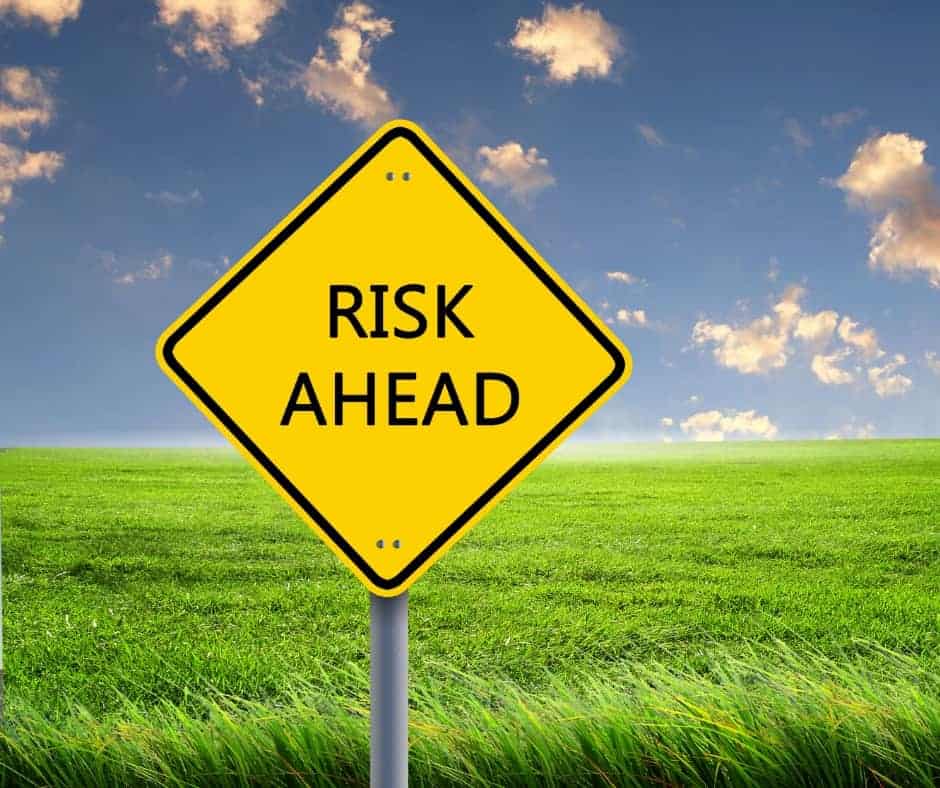 Red Flag #11: He Is Extremely Selfish

A godly husband will love his wife like Christ loved the church, selflessly laying down his life for her. A self-focused man who can’t love others well and be compassionate isn’t prepared to do this.

Red Flag #12: His Faith Is Superficial

This really should have been closer to the top. Ladies, if you are looking for a healthy relationship, it needs to be with a man who has an abiding faith and loves Jesus more than he loves you.

A shallow faith is one that will be easily uprooted in life’s storms.

See how he treats wait-staff when you are not looking. Someone who treats those who “don’t matter” as “less than” isn’t someone you want to build a life with.

Red Flag #14: People Who Know Him Well Warn You

If others are warning you to step back, be careful, or tread gently then you should be getting the hint that there’s nothing healthy going on here.

Red Flag #15: Your Gut Tells You Something Is Off

Sometimes the Holy Spirit will make sure you have no peace to warn you about a bad relationship-follow that.

Red Flag #16: Your Friends Dislike Him

If you have Godly friends who love you, ask yourself what they may be seeing that you don’t –and pay attention.

Don’t date married men, it is dishonoring to God and to yourself. And girlfriend, “separated” is still married.

Relationships are built on trust.  If you are with a liar, you will have no trust and that is no way to build a healthy relationship.  Dump him now.

Lastly, one of my favorite books about finding a person who is good for you in relationships is called Safe People by Drs. Cloud and Townsend.  Take a look if you are interested in finding out easy ways to know if someone is interpersonally safe to date (or even to have as a close friend).

Extricating yourself from a potentially dangerous or damaging relationship is better done earlier than later.  If you see any of these 18 red flags when dating, it’s time to run in the opposite direction.

And before you start dating, go through this pre-dating checklist for Christians to make sure you’re ready to be in a healthy relationship that can evolve and mature into something that lasts and flourishes. 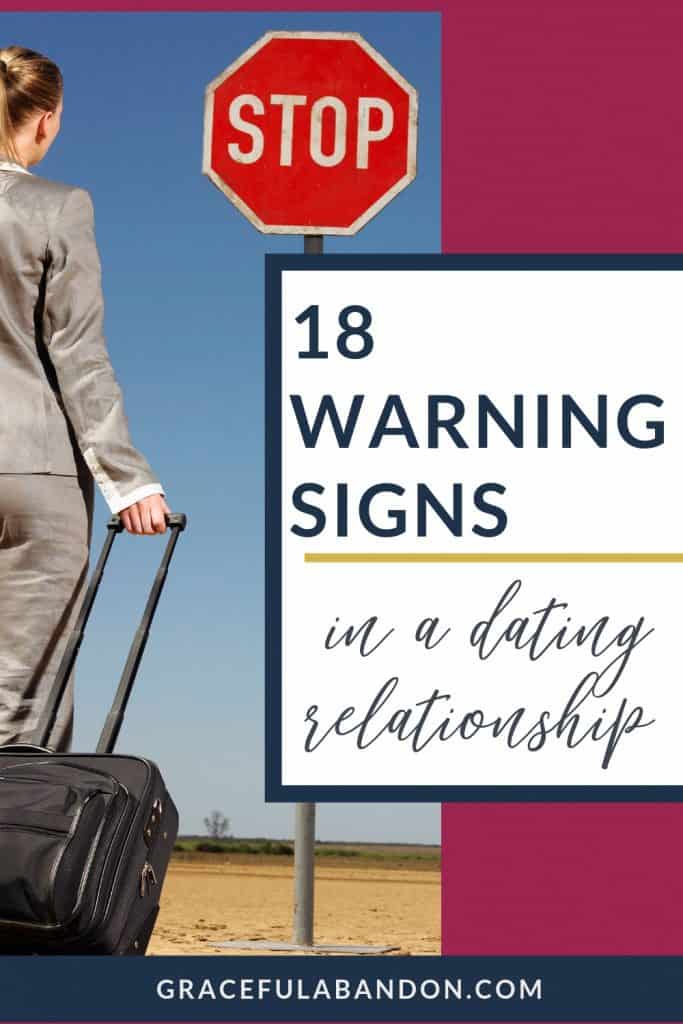 This post originally appeared on Faith It Like A Boss and  has been updated and shared here with permission from Rosemarie Ramsingh-Blackaby. 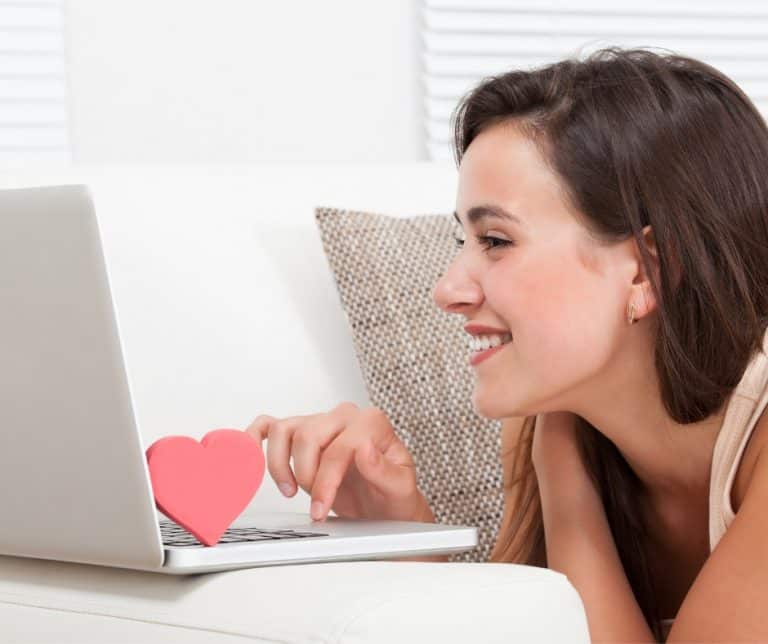 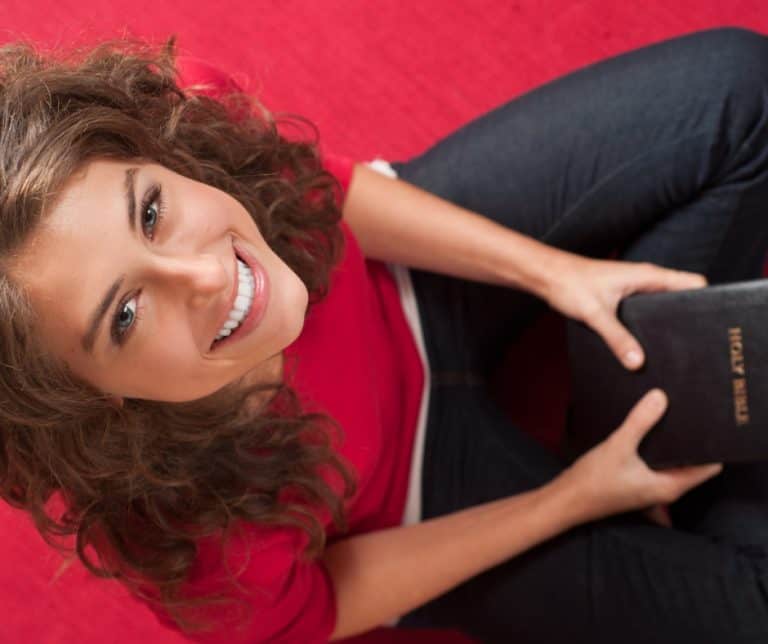 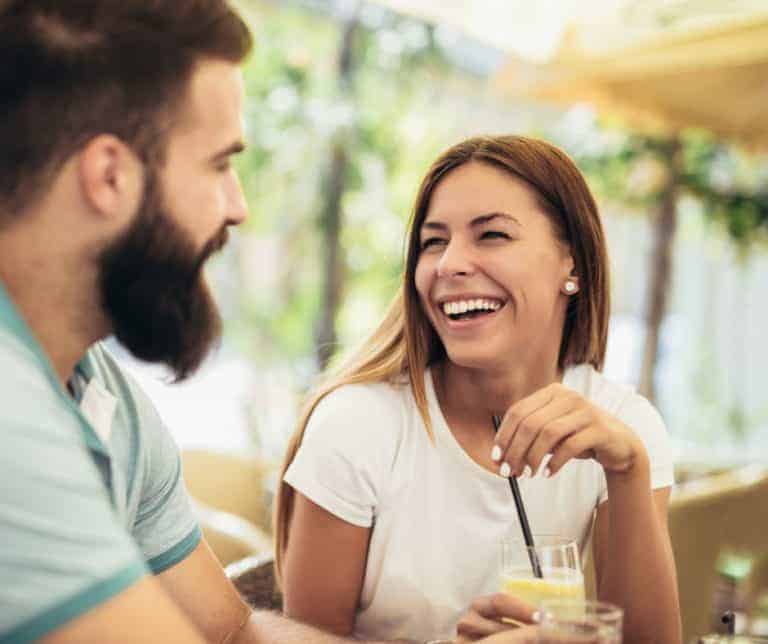 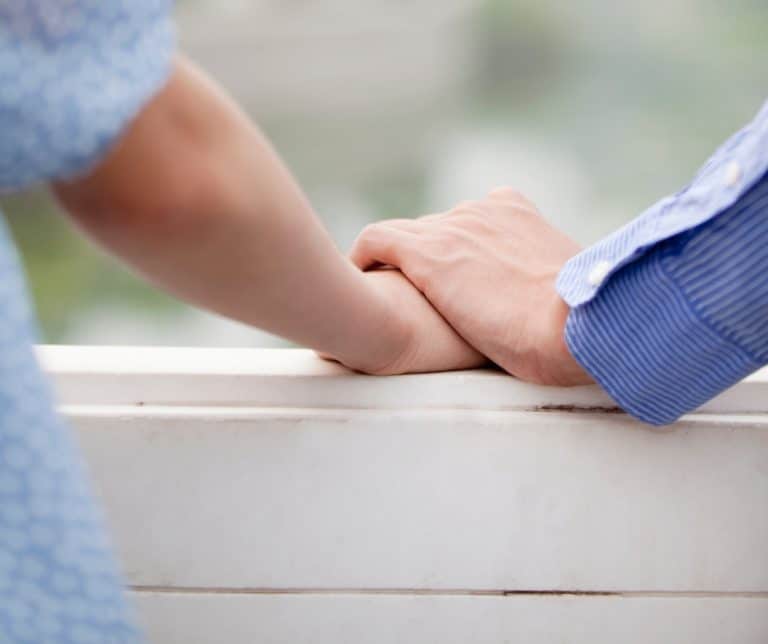 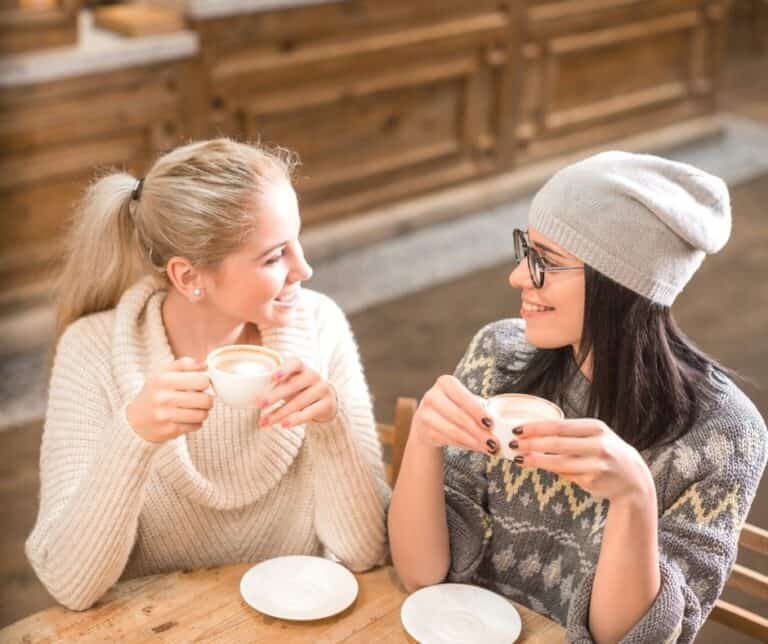 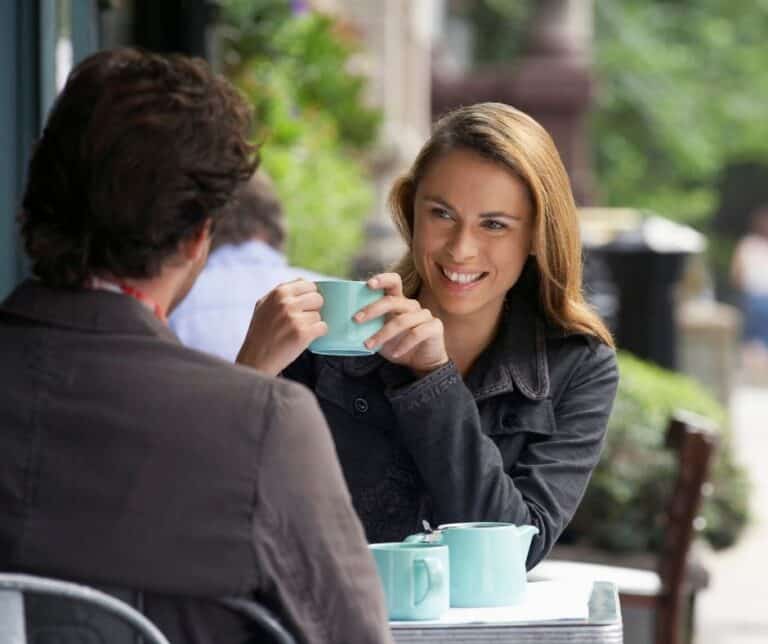